24th June, 2017: TCV School, Upper Dharamsala had its first Parent Teacher Meeting (PTA) for the year 2017 on 24th June, 2017. Following the suggestions and the resolution made during the 2016 MDC on the need of a PTA meeting before the examination, the function of the first PTA was held on the above mentioned date in Dekyi Tsering hall from 9 am to 10.30 am.

Around 330 parents attended the function.  The School Principal welcomed all the parents and introduced the new changes in the administration to the parents. She then talked about the importance of the PTA meetings and the research based proofs on the benefits of such meetings on children. She stressed on the children being the most important, and thus the importance of need of collaborative team work by the parents as well as teachers due to the constant change in the society. She further requested the parents to keep a close vigilance on the actions of their child, and to further keep in constant touch with the house mothers and teachers. The 3 focus areas for 2017, resolved in 2016 Education Development Council (EDC) meeting, which are a) Promotion of Secular Ethics in Education, b) Strengthening implementation of Basic Education Policy and c) Controlling Substance Abuses, were also made aware of to the parents.

Dr. Sonam Topgyal, from Delek Hospital who especially came to attend the function,  introduced the hospital’s project titled ‘Zero TB in Tibetan Kids’, currently undergoing in the school. Aimed at eliminating TB in Tibetan school children, the doctor explained the types of medication and appealed the parents to take more responsibility.

Finally, the school Principal gave a short workshop to the parents on the CBSE initiative for class IX and X. She explained on how the entire pedagogical machinery gets affected and the changes under the CBSE’s remodeled scheme.

Mr. Passang, the Vice-President of Parent’s Association, through an anecdote of Thomas Edison stressed on the importance of parent’s involvement in a child’s success and urged the parents to use positive reinforcements.

Information and knowledge uploaded, the parents headed to the respective sections to meet the teachers of their child. The whole PTA meeting went from 10.30a.m. till 1.30 p.m. As per the school diary, the second PTA will take place on 18th November, 2017. 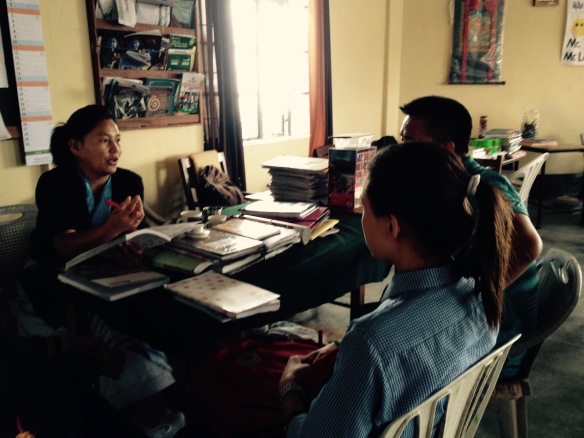 To observe World Tobacco day, Health and Environment Committee members organised an event on May 31, 2017. We have conducted drawing completion on the theme ‘Tobacco’ in advance and students who were selected for top three positions were given prize by Senior Section Headmistress on the day.

After the assembly while students were leaving the hall for class, we have distributed two coloured bands to everyone – purple and yellow coloured bands which has different meanings.  The meanings of the colours were explained to the students:  yellow colour means “I will not smoke in school” and purple colour means “I will help my friends to quit smoking”.  Students were asked to collect the band colour of their choice and stick on their sweater for a day. We have also prepared various charts with information relating to the tobacco day and put-up on different board near senior section.

In the evening, we have requested Kunphen – a NGO working on treating drug abuse in Tibetan community to conduct a talk on tobacco for senior section students at Dickyi Tsering Hall. They came with two speakers who shared their real life experiences to promote awareness among our students. Their talks were followed by question and answer session. The day was concluded meaningfully.   We would like to extend our special thanks to our volunteer teacher Gen Monlam la helping us make this event a successful one. 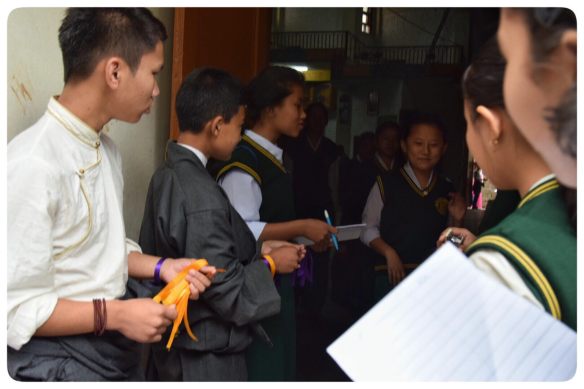 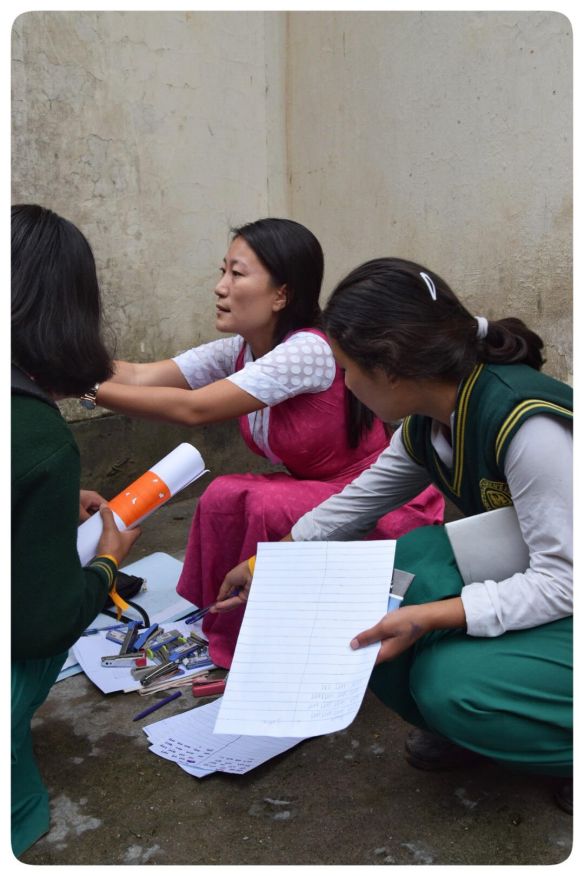 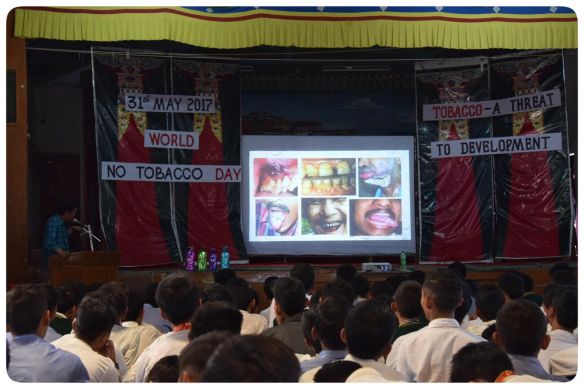 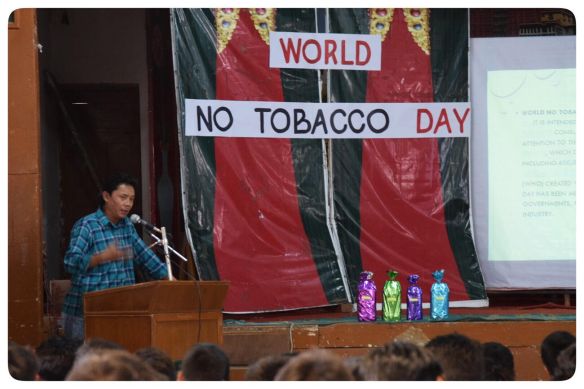 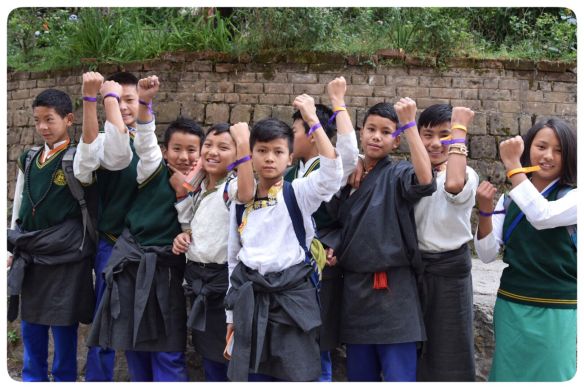 Clean Up during His Holiness Teaching to Tibetan Youth

From June 5 to 7, His Holiness the Dalai Lama gave a special teaching to Tibetan youths at Tsuglakhang. During the three-day teaching, all the 60 members of our school’s Health and Environment Committee did their best to keep the temple courtyard clean.

To start with, we all gathered at one place to carry out the work more efficiently. Then Gen Tsetan la divided all the students and staff into four groups and appointed one group leaders. Groups were sat at different corners of Tsuglakhang courtyard. Once volunteers started distributing bread and tea to public, our student groups started moving to their respective places and collected the trashes after every break and lunch hours. 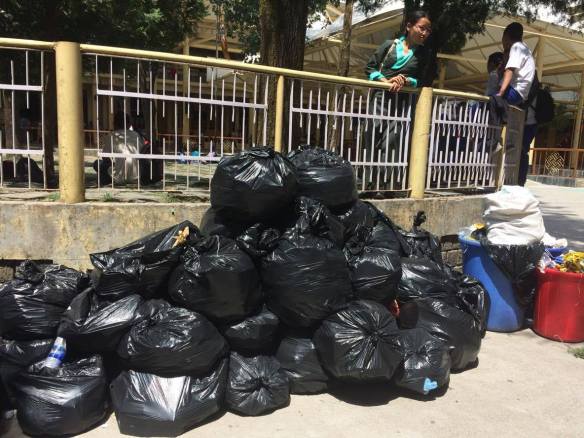 At the end of each day’s session after public leaves the temple area, we stayed back to sweep the whole area and collect all the trashes at one place. We have requested class nine boys to stay back little more time to wait for the garbage truck and send others back to their homes.

Above routine was followed during all the three days of teaching and we appreciate everyone’s cooperation as we were able to carry out the clean-up work without any complaints and inconveniences.

18th June, 2017 was observed as world Gang gyok day in different schools around the world an

d we the staff members and students of Upper TCV Dharamsala took part in observing world gang gyok day and organized 6 km health race from our school to Asia Health resort and back to school.

It was around 7:45am that the school Principal, headmasters, physical education teachers and the selected students for Kang Gyok (a health race) got assembled on basketball ground. Before the actual race, the school Principal gave a brief introduction of the world gang gyok day followed by physical teachers’ instruction on how to proceed for the short distance course.

At 8:15am with a school banner raised high, the children from classes VI to XI took part in actual rac

e with excitement, zeal and sincere motivation in support of the world gang gyok day program organized by the school administration. All the participants were inspired and motivated by the active participation of the school principal, headmasters and the physical education teachers in the actual race covering the complete race course.

After the completion of race, all the participants returned back to school with lot of joy and satisfaction. All the participants were then told to relax and served a bottle of water and fresh juice sponsored by Nangten Menlang Socio Buddhist Research Charitable Trust. 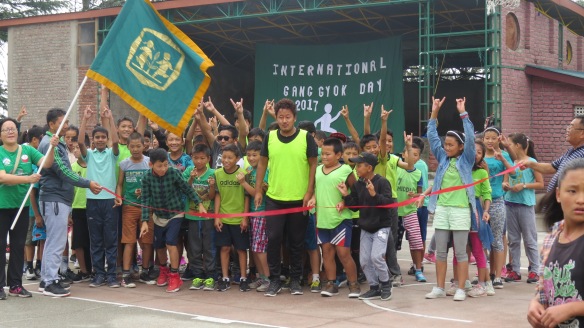 Saka Dawa, is the most sacred holy month when the Buddhists celebrate the birth, enlightenment and par nirvana of Buddha Shakyamuni. The holy month stretched from May 26 to June 24, 2016. Many believe that on Saka Dawa karmic results are multiplied by one hundred million times. To involve in positive deeds during this holy month, the school organized 3 days of Kangyur reading  from May 31 to June 2, 2017. Before the recitation, as a part of the sacred tradition of Tibetan Buddhism, Class XI students led by two Philosophy Instructors of the school and the student council tracked the the school campus carrying 101 volumes of Kagyur scriptures from school temple to the Senior Section, there by blessing and consecrating the whole area. All the students of Senior Section; students from class VI to XI and teachers organized reading the scriptures in their classrooms, while staff and hermits read the same at the school temple. The students expressed a depicted sense of satisfaction reading the Kagyur very seriously. The program ended with consecrating of the ceremonial offering cake at Dekyi Tsering on the evening of the 2nd June. 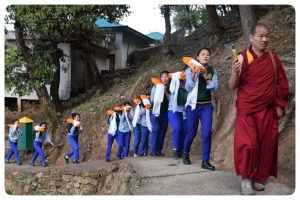 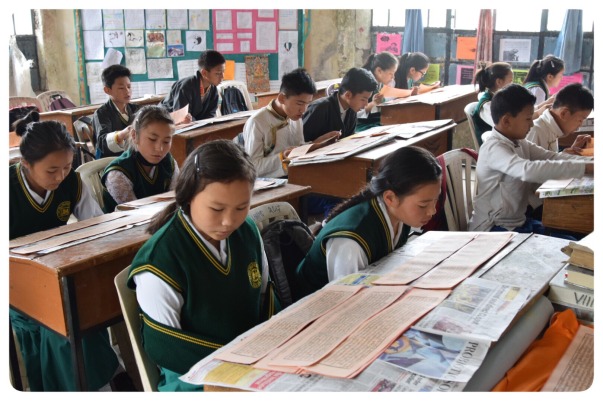 Dharamsala, 29th May, 2017:  TCV School, Upper Dharamsala received the 3rd phase of the Geo Hazards workshop on 29th May, 2017. The students of Senior Section attended the hour long workshop from 2.30 p.m. to 3.30 p.m. in the Hermann Gmeiner hall. The first and the second phase of the same workshop were provided to the teachers and home mothers respectively. 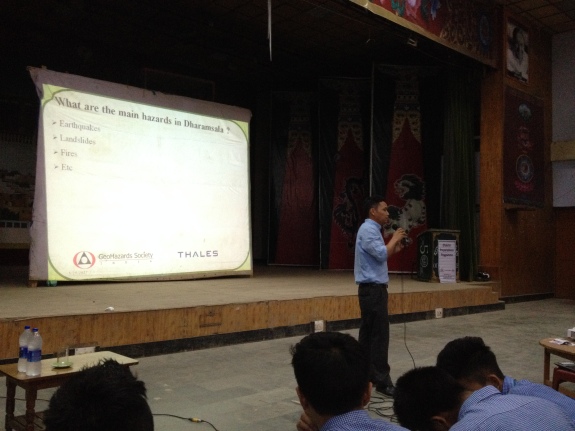 Mr. Kunchok, a member of the Geo Hazards started his workshop with the explanation of the meaning of hazard and disaster. He then familiarized the students with the main hazards in Dharamsala, and the reason why we should be prepared. He further talked about unprepared versus a prepared school during a disaster. The students were explained how a school should be prepared for any disaster especially earthquakes. Many of the misconceptions people hold in terms of earthquakes were also cleared. Every one in the auditorium were made to practice ‘Drop, Cover, Hold’ the number one safety every one must follow. 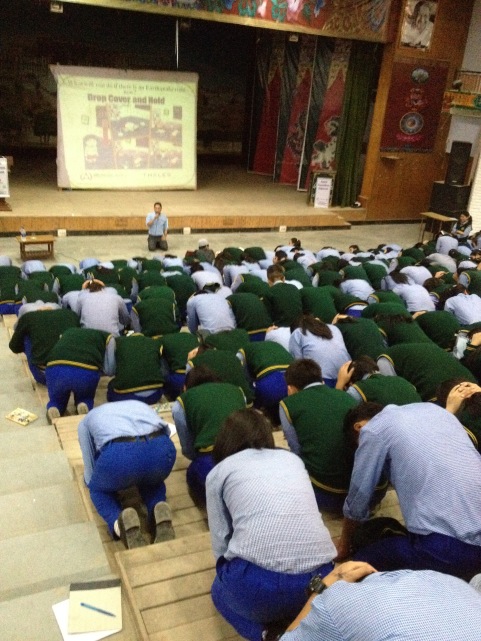 Besides earthquake, Mr. Kunchok also briefed the students on fire hazards. The students were explained the ‘Stop, Drop, Roll’ when ones clothes catches fire. The students were further clarified on various actions one must follow to survive a fire. A question answer session followed the talk, in which students from various grades asked a variety of questions. Following this workshop, the school believes that the students are more equipped with the knowledge and thus more and better of disaster preparedness.

On 22nd May, two members of the 16th Tibetan parliament in exile Mr. Dawa Phunkyi and Lutsang Gyari Thar paid an official visit to TCV school upper Dharamsala.  They were received by the Education Director of TCV schools Mr. Sonam Sichoe la. The two dignitaries addressed the gathering consisting of students from Classes VIII and above and the staff members of Upper TCV School in Hermann Gmeiner hall. There was a question and answer session soon after the address. 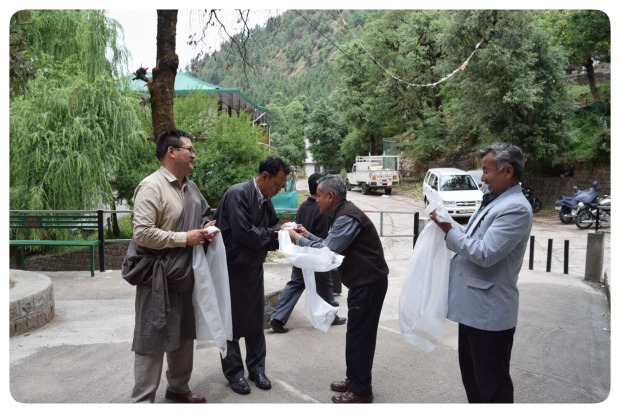 Mr. Dawa Phunkyi la began his talk on importance of punctuality. As an alumnus of TCV School Upper Dharamsala, he was taught about the importance of time during his school time by the dedicated staff members of the school. He reminded the students and staff members of the importance of preservation of rich Tibetan traditions, language and culture for Tibet and Tibetans in particular and world at large. He also highlighted the three commitments of His Holiness the 14th Dalai Lama and requested all the students to follow the invaluable advises given by His Holiness the Dalai Lama. He urged every one specially the younger generation to work hard and never to lose hope for hope is the only thing that could keep us going. Mr. Dawa Phunkyi further reminded us not to forget the kindness His Holiness the Dalai Lama and follow his words wisdom.

Lutsang Gyari Thar in his speech tried to bring back the glory of Tibet’s history at the certain historical point and pride of Tibet as an independent nation. He then came to the central point of his speech to let the audience pointer about the key causes of losing our country. He reiterated our national obligation to educate ourselves more and called for to take greater responsibilities by all. He also advised the students to follow the Buddhist technique of study i.e through listening, analysing and practicing in logical and reasoning. Thus, he conveyed his message not to be swayed by cheap and baseless gossips and talks. But remain consistent in your philosophy based on reasoning and rationality. Mr.Lhutsang Gyarik Thar further reminded us not to forget the kindness and support shown by others in our lives.

The President of TCV schools honoured the dignitaries with the traditional white scarf followed by the word of thanks from the Village Director Mr. Tsultrim Dorjee. 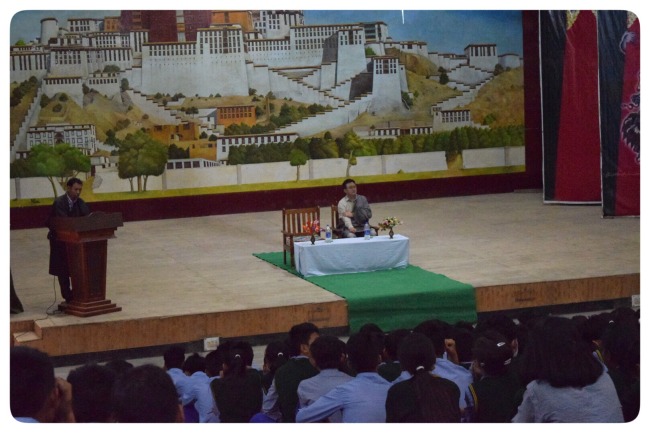 In the afternoon, the two members of the Tibetan parliament in exile accompanied by the President, General Secretary, Village Director and school Principal paid a quick visit to three sections of the school and observed Tibetan language enrichment programs organised for the teaching staff members of Infant section and junior section. They also witnessed dialectic classes organised as teachers’ professional development program for senior section staff members.